Welcome to our website. Please select one of our companies below to learn more about them.

For over 25 years, Agora Financial, a subsidiary of Agora Inc., has been a leading innovator in the financial publishing industry. Not only have our economic forecasts been uncannily accurate, but we’ve consistently beaten the mainstream financial media to the punch.

Agora Financial readers were aware of the housing bubble, the credit bubble, the excesses underlying the Panic of ’08, the pending collapse of Lehman Bros. and the bankruptcy of American Airlines well before they happened — and in many cases, were able to prosper while other investors got blindsided.

Agora Financial editors’ consistent ability to stay ahead of the mainstream has earned recognition from dozens of media sources, including The Wall Street Journal, The Economist, Financial Times and others.

Agora Financial’s parent company, Agora Inc., was founded in 1979 and made the move to historic Mount Vernon district of Baltimore in 1994. Throughout the years, founder Bill Bonner and Agora Inc. have received many preservation awards. Today, Agora Inc. occupies eight buildings in the Mount Vernon area, including Agora Financial headquarters at 808 St. Paul St. 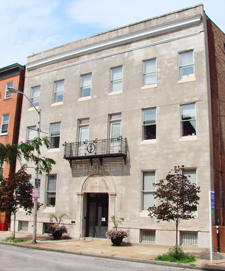 The 808 St. Paul St. location was originally built as two separate homes in the 1850s. Later, the homes were merged, and in the 1920s, the building became the temple of the Order of the Sons of Italy in America. This was the first Grand Lodge of the state of Maryland and served as their headquarters until the 1950s.

After that, 808 became the Midtown Home, a home for aged and infirm patients. A large rear wing was added to house more occupants, but this was damaged in a fire. During the building’s renovations, the wing was demolished to return the house to its original form.

If you’ve made your way onto this page, odds are that you’re new to The Daily Reckoning and would like a little background… or perhaps you’re one of our long-suffering readers in need of a reminder of why you’ve stuck with us through the years.

Either way, you’ve come to the right place.

At The Daily Reckoning, we’ve been in the business of independent financial forecasting since 1999. We take a look at the world and markets, make an educated guess about where they’re headed and alert you to ways we think you can protect yourself and profit from the trends that the mainstream press has overlooked.

Our metier is forecasting booms, busts and bad endings on your behalf… patting you on the back when you do well by them… and owning up to it when we make hash of it.

It’s your money, after all.

Each day that the markets are open, we have the honor and privilege of writing to subscribers of our free daily e-letter with one big idea. One way you can profit from and make sense of (or at the very least, laugh at) the world of finance, economics and politics.

We publish your Daily Reckonings, sent by email, each and every afternoon.

For a decade and a half, we’ve aimed to make these reckonings the most entertaining and informative 15-minute read of your day — and we still do.

But we must admit that we haven’t done it alone. We’ve had the distinct pleasure to work with the leading minds in publishing, mining, oil services, finance, banking, genetics, economics and even… (gasp!) government.

Our cast of characters has grown to the point that we simply can’t feature all of their insights in a daily email — instead, you can find our most interesting investment analyses for the day right here, on our site… along with insights from our “golden Rolodex” of industry contacts.

Everything from the latest advances in regenerative medicine… to the Fed’s next rate hike… to the future of energy… you’ll find it all right here. Because we know that the world of money isn’t just bankers and stock market moves. Or energy and technology. It’s all of these pieces together that make up the larger story.

Our goal at The Daily Reckoning is to help put the often confusing (and infuriating) world of finance into context… to help you connect the dots between your bank account and the decisions that are made in Washington.

Thanks for joining us,

Laissez faire is a French term meaning “let them be.” It has, for more than a century, referred to the belief that an individual is best equipped to solve their own problems and create a more prosperous society, while bureaucratic mandates and top-down control tend to make problems worse.
True to that tradition, our goal is to help you learn the laissez faire philosophy from some of the best philosophers, academics, and advocates of liberty who ever lived — and to show you how to apply those ideas with actionable strategies and tips on getting government out of your life.

Laissez Faire Books has a long and storied history that started in 1972 when founders John Muller and Sharon Presley opened a little libertarian bookstore in Greenwich Village. The official opening was attended by many local libertarian writers, including Murray Rothbard, Roy A. Childs, Jr., and Jerome Tuccille.

As the business changed hands and moved around the country to San Francisco, Phoenix, and, finally, its current resting place, Baltimore, so changed the method of selling its ideas…

Then on March 17, 2011, Agora Financial LLC, a publisher of books and newsletters on economics and investments, acquired Laissez Faire Books from the International Society for Individual Liberty (ISIL).

Still to this day, the ideals set forth by the founders of the little bookstore in 1972 are defended voraciously.

We simply defend them in a different way—through newsletters.

In August 2013, the Laissez Faire Letter was launched. True to its roots, the monthly newsletter attracts individuals willing to take action to live a more self-reliant and independent life.

This version of the business again changed to meet the needs of its readers, providing actionable solutions to overreaching government and its cozy relationship with big Wall Street banks and other industries.

Today, the Laissez Faire family has expanded to include additional newsletters. These include:

Spy & Survival Briefing, written by former CIA officer Jason Hanson, whose mission is to provide readers with the knowledge and the skills to protect themselves and their family in the face of danger, economic turmoil, natural disasters, and more…

With every newsletter, the business finds an opportunity to spread the ideas that are important to us, as they were to the founders.

Although the ideas may seem varied, each and every one of our newsletters is designed to bring freedom, reliance, and self-sufficiency into every sphere of your life.

That includes your health, your wealth, and your safety.

Although we no longer have a book store, our founders’ ideals are present in every newsletter we publish.

And as the Laissez Faire family continues to grow, we are committed to ensuring that this remains true.

In Living Well Daily, you’ll find proven health secrets for preventing and beating some of the most serious health issues around. Even better, we’re going to show you how to improve your health without turning to life-wrecking surgeries or dangerous prescription drugs.

We’ll introduce you to tips and tricks on how to use nature’s resources to increase your health, further your fitness, and promote longevity — in short, to “live well.”

Living Well Daily is written by Dr. Scott Olson who began his career in medicine – and dedicated his life to uncovering the true, underlying causes of disease.

Through his innovative medical practices in Tennessee and Colorado, Dr. Olson has successfully treated countless seniors from across America for arthritis… heart disease… diabetes… and even cancer. All without risky prescription drugs or painful surgeries.

Dr. Olson’s also published training materials that have educated a generation of doctors on safe, natural cures and treatments.

Now, you can have access to all of Dr. Olson’s latest breakthroughs in each issue of Living Well Daily, his FREE daily e-letter. Each day, Dr. Olson will deliver straight to your inbox his latest tips for managing chronic disease and enjoying perfect health… no matter your age.

Living Well Daily is a publication of Health Sense Publishing. At Health Sense Publishing our team of doctors and researchers scour the globe for breakthrough treatments you’ll never hear about from the mainstream. We tackle the biggest threats to your health today, as well as simple, inexpensive, natural ways to achieve and maintain robust well-being. Click here for a full list of our newsletters and products.

Choose Yourself Financial is an independent, subscription-based publisher of financial and entrepreneurial information that is dedicated to helping millions of people around the world choose themselves.

Founded by James Altucher in 2014, Choose Yourself Financial produces a steady stream of unbiased research to more than 50,000 paid subscribers seeking an edge in a wide variety of sectors and market conditions.

Choose Yourself Financial builds and develops products that help people in search for improving their financial, physical and emotional self.

Choose a Newsletter Below to Learn More:

The Altucher Alliance is the most exclusive and valuable membership James has to offer. That’s because the Alliance provides you with every Altucher service, including all future services, for life. Click here to learn More >>

We’re living in a new generation of employment. The corporate system that most people thought they were safe in is ending. It’s dying. Today, it’s no longer a choice of “should I be an entrepreneur or an employee?” We’re all entrepreneurs. And our product is ourselves. Our time. Our energy. Our dedication and commitment. Click here to learn More >>

Altucher’s Income Advantage is designed to provide you access to an area of the market that most investors are not aware of, but have historically provided some of the most consistent, safe, and life changing returns. Click here to learn More >>

Altucher’s Top 1% Advisory is the culmination of James Altucher’s more than 20 years experience on Wall Street, as a private investor, hedge fund manager and author. Click here to learn More >>

Investing in small value stocks has been the source of several fortunes. In fact, several of the world’s most successful investors began their career taking advantage of the bargains found in smaller stocks. These are the same types of stocks that Wall Street ignores, that we want to focus on and are likely to be the source of similar life changing profits in the future. Click here to learn More >>

Do Not Sell My Info